The Challenge of Emergency Evacuation from High-Rise Buildings

Headlines over the 150-year history of tall buildings provide us with evidence of what can go wrong and the likely costs and consequences of such events. Many of the challenges are the same as those in any multi-story building, but the higher the building, the more complex the problems become, with some super-tall skyscrapers requiring two or three hours to get everyone out. Even if you are not evacuating people from a skyscraper, the considerations that follow will give you useful information for reviewing your plans for evacuating employees and visitors from any multi-story building.

Under normal circumstances and with a good evacuation plan, it should only take a few minutes to evacuate one of these basic 5 or 6-story buildings. Thus, when we talk about skyscrapers or high-rise buildings, we mean buildings over 10 stories, their height made possible by the invention of the elevator. The majority of the people will have reached their destination through the use of elevators, which would probably be out of action in an emergency.

The population density, the volumes of traffic, and the vertical distances in a skyscraper demand a more detailed and focused investigation, planning, and delivery cycle for your evacuation plan. Challenges such as the safety of disabled employees and visitors are intensified.

Since it is unlikely that you were involved in the design, engineering, and construction of your building, you will need to work with the alternative escape routes and exit points that are present. So your challenge is: “What can you do to reduce the risk of an incident developing into a tragedy?”

1
Structure. Do your homework. Investigate every floor and every aspect of the structure of your building and become familiar with all of the details and their intended purpose in relation to emergency evacuation. Do not rely on floor plans alone. Walk every inch of the building yourself and take notes. It helps if you do this with someone familiar with each section of the building and the activities that take place there. That person can help you identify features and oddities and come up with a list of possible threats.

2
Routes. While you are inspecting and taking notes, check the marked exit routes and exit points. Pay particular attention to the likelihood of escape routes being compromised or obstructed and if this might happen on certain days when, for example, hallways could be used temporarily for shipments of boxes. Think through the whole route, walking in the shoes of an evacuee starting out from each of the locations you visit – and then consider additional challenges if evacuation were being done in near darkness, by someone in a wheelchair, by a child, or by a visitor unfamiliar with the building.

3
Volumes. Estimating the volume of people that will need to escape from any part of the building is a normal part of evacuation planning. However, volume becomes critical in a high-rise environment, since excessive crowding on lower levels will take place as those from upper levels descend, creating “pinch points,” which impede evacuation. Gain a clear understanding of the likely volumes of people who might be in various parts of the building on a normal day and what their special needs might be. In addition, look for regularly scheduled events that would increase the number of people in the vicinity. As you visit and inspect each and every area, build up a picture in your mind of the growing volumes as people make their way downwards and mingle with the rest of the crowd. Ideally, your architecture should allow for escape routes to become wider as they merge to avoid congestion, but, in practice, this is not always the case, especially if you are in an older or reconfigured building. In your evacuation drills you will need to be prepared for “heavy traffic” in the halls.

How long will it take to get everybody out? For example, if people leave the venue at a rate of one person every 2-4 seconds (allowing for delayed response or special populations), and it takes each person an average of 5 minutes to travel to safety (which may be some distance, and exposed to hazards or obstacles along the way), and you have a crowd of 1,000 people, you could estimate a minimum of approximately 55 minutes to completely evacuate the Venue.

4
Warning. You should have a system of warnings and alerts in place to cover different emergency situations. For a dangerous occurrence such as a shooter on the premises, the warning might be in the form of text messages to managers and others responsible for emergency actions. People would be instructed where and how to take shelter until local authorities give instructions to go back to work or evacuate the premises. The traditional alarm would mean that emergency evacuation procedures are being officially invoked for an emergency, a planned test, or a planned drill and that everyone should follow the instructions of the marshals to escape the premises. The alarm should never be used for a “surprise test,” since its use in anything other than a real evacuation lessens its value. When the alarm is used too frequently, you run the risk that people will stay where they are rather than evacuating – and once they realize that the threat is real, it may be too late for them to get out. 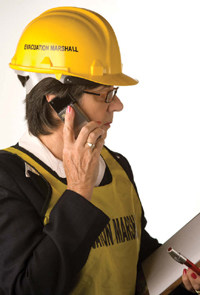 5
Leading. Your growing crowds will need to be led, guided, or marshaled as they make their way through the confusion towards safety. In a high-rise building, you will need more volunteer marshals and a regular training program based upon floor plans, business groupings, or other common factors which particular groups might share. Marshals will need visible gear and the tools to do their job – clipboards, flashlights, pens, and whistles. A common “uniform” to show the person’s role is the high-visibility vest. However, one company that prided itself on its informal culture simply outfitted all the marshals with brightly colored baseball caps that said “Marshal.”

6
Informing. During the actual evacuation, keep the key players informed about progress and any further developments or special instructions. Walkie-talkies, cellphones, and mega-phones are all possible. Ideally, this should be a two-way communication system which will work under difficult circumstances throughout the building and its immediate surroundings – and a communication system commonly used by the people involved, since you do not want people learning a seldom used communication system in an emergency.

7
Checking. A very important aspect of evacuation planning, especially in the high-rise scenario, is that of accounting for every individual who was in the building at the start of the incident. A roll call at the final point of assembly is good, but it is a retrospective process that may take place too late. A simple evacuation area checklist would itemize each room, office, rest room, etc. on each floor of the building. Marshals would check each of the areas and check off that it was empty before leaving that floor of the building. In the event of a fire or local emergency, these lists could then be given to fire or law enforcement officers to show that the building is, indeed, empty. Failure to respond to the alarm or other safety communication is a common problem and should be handled with a severe reprimand from the highest level of the company.

Once you have created the Emergency Evacuation Plan, it is important to test and drill several times a year, although that doesn’t necessarily mean a total evacuation for every test. Some tests may be limited to specific areas, populations, or extent. In between tests, it is important to check all the escape routes and alternate escape routes that are in your plan for each area of the building. Circumstances change regularly, and the back doors to the parking lot you were planning to use may now be blocked by a dumpster or that little-used hallway may have been made into a closet. Continue to check for unexpected problems such as missing signage, blocked passageways, cluttered stairwells, or locked doors. Finally, for your own safety and the safety of everyone on your team, scan the horizon for any new ideas or technologies which you might employ to improve various aspects of the EEP for your high-rise building.

Jim Burtles, KLJ, CMLJ, FBCI, has over 35 years of business continuity consulting experience in 24 countries. He began in-depth research on the subject of emergency evacuation in 2001, after the terrorist attacks on the World Trade Center in New York City. More details and examples for the techniques covered in this article may be found in his book, Emergency Evacuation Planning for Your Workplace: From Chaos to Life-Saving Solutions (Rothstein Publishing, 2013).

Does Your BCP Reflect Real People with Real Needs?

Enterprise Resilience Saved the Day During COVID. Does Anyone Realize It?

What We Should Do Now