Satellites: The Tech We Should All Be Using

Some may dismiss satellites as old, outdated technology, but in reality, they are a disaster response tool that every organization should have in its arsenal.

Satellites are a mainstay in large corporations and government entities, so why are they often left out of disaster preparedness plans in other institutions?

One reason may be the fact that satellite systems require a fair bit of planning before implementation – but I believe they are worth the effort. Many people may not know where to begin when it comes to satellite planning, so the best place to start is with a service evaluation. What kind of satellite service does your company require for its disaster response plan? Telephone, cell, broadband, portable radio? Or perhaps a combination of those. Once you’ve evaluated your needs, you can take steps to implement the satellite technology you want to use.

Today’s satellite systems can be mobile, transportable or fixed (more on this later) – making them a versatile tool for various disaster situations. They can provide narrow-band signals such as text and wide-band signals such as industrial-size internet. And to top it off, satellites can be independent of terrestrial infrastructure – unlike traditional systems that rely on wires or cabling – and most disasters do not affect their ability to function. In the worst of circumstances, we all need communications systems that we can rely on.

Compared with the 1990s and the 2000s, satellite systems have come a long way. They are now cost effective and easy to set up and operate. Competition for services has lowered the cost of operating satellites, and the relatively recent introduction of operators such as OneWeb and Starlink, as well as low Earth orbit satellites, has changed the industry for the better.

Satellite services can range from robust push-to-talk voice radios and Voice over Internet Protocol (VoIP) to long-distance WiFi. Automatic acquisition of the satellite as well as signal-level control are completely self-contained. Combined with cost-effective air time and user-friendly hardware, these have become the mainstays of today’s satellite systems.

From communication, to weather and radar prediction, to GPS mapping and search-and-rescue operations, satellites offer a wide range of critical disaster response tools.

There are three types of satellite systems, all with different benefits and uses. After evaluating your organization’s needs and resources, you’ll be able to determine which type is best for you.

Mobile satellite systems are the smallest of this type of communication system. They can be used while in motion and range from the size of a two-way radio to the satellite system installed on RVs. The dish is protected under a fiberglass-type material and the system offers one-touch setup and operation. Used primarily as a satellite television receiver, this kind of system offers two-way internet, but at lower speeds than in non-moving systems. Mobile systems can be used with 0.3-meter (12-inch) antennas and are useful as backups for larger transportable satellite systems in disaster situations. 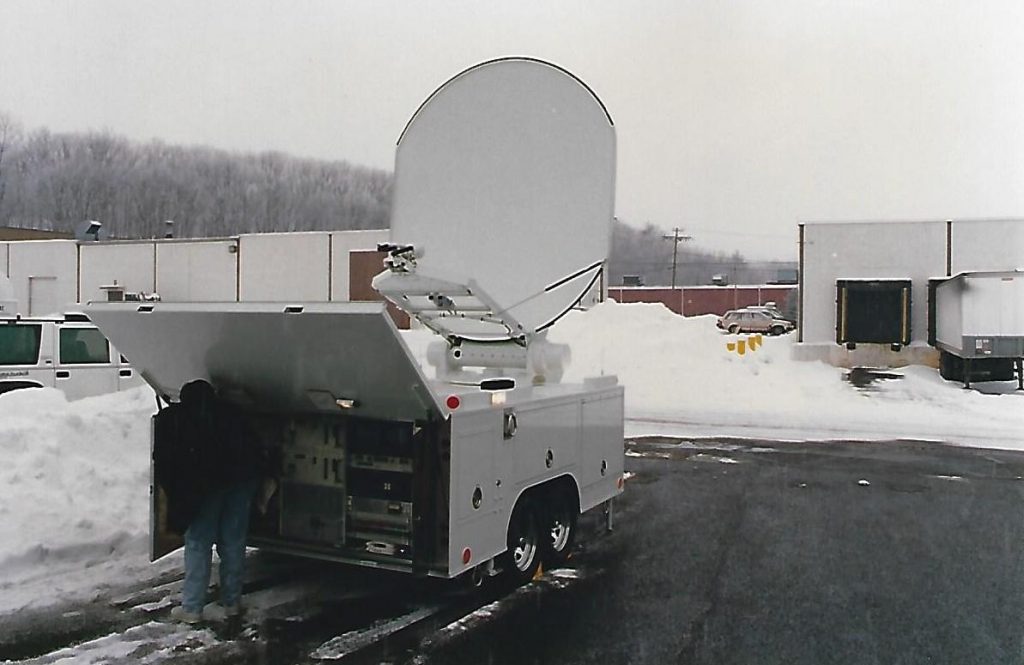 Transportable satellite systems are larger than mobile systems but not as big as fixed systems. Some transportable systems are classified as VSAT, which stands for Very Small Aperture Terminal and refers to dish antennas that come in a wide range of sizes, from 0.7 meters (just under 30 inches) to 1.9 meters (75 inches). Another type of transportable uses a dish antenna that is 2.4 meters (8 feet) to 3.8 meters or (12.5 feet) and works in all weather conditions except extreme cases.

Transportable systems are typically mounted on the rooftops of trailers or other vehicles, or they can be set up to slide out the back of an SUV and used wherever the vehicle is parked. Most systems require a source of AC power, such as from a nearby facility or generator, although some can operate on 12 volts of DC from the vehicle’s running engine. This type of system is used for disaster internet traffic and VoIP.

There are also transportable trailers or sprinter vans, which are self-contained units that have an AC power generator, routers, long-range WiFi and a transmission package. These antennas can be auto-acquisition with larger dish antennas of up to 2.4 meters (8 feet in diameter). These larger antennas allow transmission in heavy rain and are more power-efficient. Many transportable systems like this are being used as COWS, or cell on wheels. These units can provide cell service when an overload or outage has occurred, and as the name indicates, are easily moved around by an SUV or pickup.

Fixed satellite systems are, as the name suggests, fixed in place, and are typically attached to a building rooftop or a concrete pad on a business property or disaster headquarters.

Fixed systems have several advantages, such as working in a greater range of poor weather conditions, especially high wind, snow and rain. There is virtually no setup time, as long as the building has AC power or a standby generator.

The disadvantage, of course, is that due to its heavier hardware and sturdy mounting – the very same things that give it its stability in rough weather – the system cannot be moved.

Fixed systems can be as simple as a large pipe-mounted satellite dish on a one-story building or a 3.7-meter (12-foot dish) mounted 14 stories up. Electronics are typically mounted inside the building or in an outside “doghouse.”

You may think a non-movable system is not for you, but it’s the right choice if your organization requires a disaster headquarters where you will need dozens or a hundred phone lines, internet service and the power to run all of it.

Regardless of the type you choose, the truth is, satellite technology is very transparent and is not at all outdated – oddly enough, cellphones have actually been used in disaster response longer than satellites. And with the range of services that satellites provide – phone, internet, imaging and location – isn’t it time we all got on board?

About the Author: Peter Zawistowski

Peter Z has been involved with nearly all aspects of the satellite industry since 1980. Peter has designed, integrated and maintained Ku and C-band systems for use through out the US, Canada, Europe and the Caribbean Islands. Peter can reached at 508-783-2488 or [email protected].

How to Shape a Workplace Culture that Prioritizes Resilience