The evolution in risk & response: an active shooter threat is dynamic and complex. 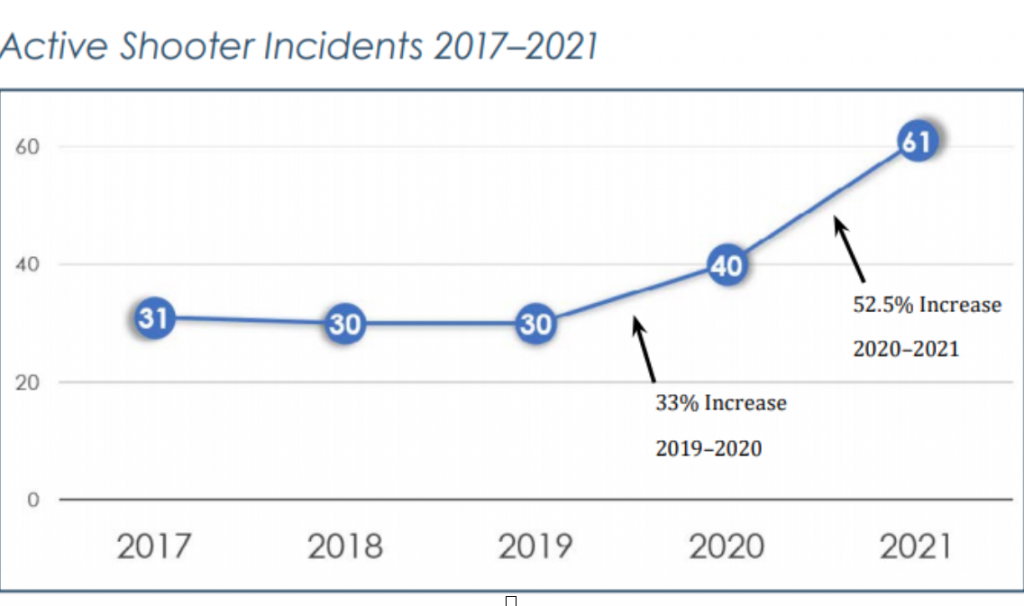 Source | FBI, 2022 (Note: The FBI defines an active shooter as one or more individuals actively engaged in killing or attempting to kill people in a populated area.)

Research indicates that active shooter incidents are acts of targeted violence that are predatory in nature. The perpetrator(s) typically begin planning and preparing for their attack long in advance of the first shot fired. Another FBI report, focused on the pre-attack behavior of active shooters found that shooters demonstrate between four and five observable indicators that they are on the pathway to violence before they strike. Family, friends, co-workers, classmates, all are positioned to see and hear the warning signs to an impending attack but often don’t recognize the significance of their observations or know who to tell or how to report their concerns.

There are several important steps to recalibrating an organization’s active shooter preparedness and response plans to align them with this evolving threat, and those steps correspond the entire event lifecycle.

TYPES AND SOURCES OF TARGETED VIOLENCE

Active shooters, in schools, businesses, houses of worship, and public places have multiple motives for their attacks. OSHA has historically defined workplace in four types, but a fourth type has emerging in the post 9-11 environment that requires equal attention.

Type I violence occurs during the commission of a property crime such as a robbery, theft or trespassing. In this scenario, there is no legitimate business relationship between the offender and the organization. The organization or victim is selected because of the perception that there is something of value to be taken, such as cash, medications or electronics. Type I violence is most common in convenience stores, liquor stores, and gas stations, as well as taxis and limousines, where people may work late at night, all alone, and have cash on hand. Most instances of Type I violence are reported in the news as robberies, but the victims are clearly on the job and in a workplace when these occur.

Type II violence is the most prevalent in hospital and health care environments and in fact, health care and social service workers are four times more likely to be the victims of violence on the job than any other type of worker in the U.S. (OSHA, 2014). In instances of Type II violence the offender is known to the organization as a client, customer or patient, and the violence occurs during the routine delivery of services. In some settings the risk of assault or injury by customers or clients represents a real and ongoing threat in everyday work.

Type III violence is what the type of violence most commonly thought of as “workplace violence. This is coworker- to-co-worker violence. There are many instances in which this also involves worker-to-supervisor, and in some cases supervisor-to-worker violence. In academic settings this may manifest itself as student-to-student or student-to-faculty violence. In Type III workplace violence the perpetrator is a current or former employee (or student) of the organization. The motivating factor is often one or a series of interpersonal or work/ school-related conflicts, losses or traumas, and may involve a sense of injustice or unfairness. Those in positions of authority are often at the greatest risk of being victimized. It is important to note that even workers or students who have separated from the organization may still represent a risk of violence in some situations. When violence and abuse follow a worker from home to work, it is considered

Type IV or “Intimate Partner Violence.” It is important for employers to recognize that violence and abuse at home are not just personal problems; they can and do intrude into the workplace, sometimes violently with tragic consequences. There are many cases each year, often involving multiple victims, when a former spouse or partner brings their violence or aggression to their partner’s workplace. The perpetrator may know their partner’s work hours, parking location or other information that may make them vulnerable. The risk of violence increases significantly when one party attempts to separate from the other. Type IV violence is typically a spillover of domestic violence into the workplace and refers to perpetrators who are not employees or former employees of the affected workplace. Women are more often the targets. Hospital and health care environments may be particularly vulnerable to Type IV violence since the workforce is likely to be predominantly female.

Type V violence involves a violent actor who is an extremist of some sort who believes that violence is necessary, justified or deserved in their radical views. In such cases violence is directed at an organization, its people and/or property for ideological, religious or political reasons. Violence perpetrated by extremist environmental, animal rights, and other value-driven groups may fall within this category. In Type V violence, target selection is not based on a sense of personal or professional injustice in the workplace, but rather rage against what the targeted organization does or represents. Type V violence can also target locations that are populated by certain groups targeted by racially or ethnically motivated extremists. Attacks of this type have targeted business, such as shopping centers, health and fitness clubs, and special events.

While some organizations or settings may have a greater risk of certain types of violence, none are immune from all five types. All have the potential to evolve into active shooter incidents and must be understood and considered in planning and preparedness efforts.

About the Author: Steve Crimando

Steve Crimando is founder and principal of Behavioral Science Applications LLC, and director of the Homeland Security Human Factors Institute. He is an internationally known consultant and educator focused on the human element in security, emergency management, and business continuity.

With more than 30 years of frontline field experience, Mr. Crimando was deployed to the 9/11 and 1993 World Trade Center attacks, the Northeast anthrax screening center, and many other disasters and acts of terrorism. He is a published author who is frequently called upon by the media and the courts as an expert in crisis intervention. He provides training and support to multinational corporations, law enforcement, intelligence and military organizations, as well as NGO’s, such as the United Nations.

Why Cybersecurity and Physical Security Need to Work Together

The Rogers Outage: What can MSPs do to ensure service continuity?